This device allows you to test infrared emitters in your pinball machine. the indicator lamp glows bright blue in teh presense of infrared light.

Assemble the tester to a 9V battery. Under normal lighting conditions, the clear LED on the back side should show a blue glow. 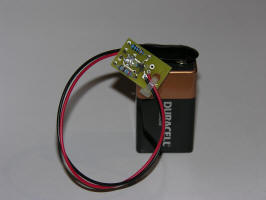 Put the sensor (the dark cylinder) near a playfield lamp. the blue LED will glow significantly brighter.

Fish the cylinder into an opto area so that the end of the cylinder is facing an IR emitter. The blue LED will become very bright as it crosses into the IR beam. If it is awkward to see the LED directly, look for blue light in the area. The LED is VERY bright when it detects IR close to an emitter.

You can also test flipper optoslots. The indicator glow caused by these is very faint, and you will need to test in a fairly dark space.

The detector will detect remote control IR from several feet away, but this is best done in a darkened room.

Here's a video of it working on a Creature VUK.

This is another derivative of the switch matrix opto. It adds an LED and a 9V battery connector to allow you to detect IR light. It is small enough and light enough to go most places there's an opto. When it finds IR, it lights blue. When it is in front of an opto emitter, it is a very bright blue.

A pinball machine in attract mode emits a lot of IR, so the LED will glow a bit. You can go into test mode and turn off the GI to avoid this effect.

Translation: If you keep it in a dark box, you will never have to disconnect the battery
Under normal lighting (example: kitchen fluorescent) the battery will last for hundreds of hours

That said, I recommend disconnecting the battery when not in use.